It was a very unhappy time when I had to run a retrospective for a team that their Scrum Master let go the day before. I had to show up and run the retro. It wasn’t that easy to talk to people about what has happened and brought up the discussion. What I decided to do was to have a colorful retrospective and then get into the Core Protocols and use the Check-in protocol.

I have begun talking about how different men and women look at colors. It was more of an ice-breaker at this point. Then I introduced the concept of different feelings and the complexity of the language we use to describe our feelings. As an example for happy or depressed, one can find so many synonyms, which are different but similar. Building on top of that, I introduced the check-in protocol and why I am asking only to use the four feelings.

I liked the check-in protocol since it is easy to understand and it is forcing you to chose from the four feelings. It gives everyone a better understanding of how you feel and create a level playing field for introducing feelings into the discussion.

The results were amazing. If you just introduce the protocol by itself, it might be confusing. The fact that I have used the game to talk about different perspectives helped a lot.

The retrospective result was amazing too. Using check-in protocol helped the team to share their feelings which helped us with a huge wall of topics and feelings. The most important topic on the people’s minds was their feeling about a team member and his departure. You can see how they described their feelings by using the biggest dot vote I’ve ever seen. 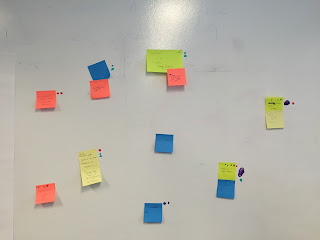