The 4th version of Coach Retreat took place on March 25th, 2017. I had the privilege to be part of all the past four of them. It feels like a family, after all, the one that cares for you and you can rely on.

The Spring 2017 edition of Coach Retreat started with the Responsibility Process and Christopher Avery. It was a great talk and a great toolkit to have for any coach. However, as Christopher suggested you don’t want to tell people where they stand on the responsibility process. The value of the responsibility process comes from internalizing it for yourself and applying it. It is not easy to master, and that’s why it is powerful. When you become a master yourself, then it can be taught to others. They have to master themselves, you don’t do them any benefit telling them in which stage they are.

The Coach Retreat then continued on with two tracks. In one track, I presented “The Simple Coaching Model“. On the other track, Sue, Peter and Omar presented the paper constellation technique for coaching, which I greatly missed. Both of the tracks included hands-on coaching practices.

The afternoon was dedicated to coaching practice. We self-organized into triads. In triads, we tried coaching as a Coach, Coachee, and an Observer and switch every 15 minutes. The immense value in the coach retreat came from a very safe environment where we could practice coaching, and be ok with failing and trying new things. It was even more helpful if the coachee brought a non-resolved issue to the coaching conversation.

Some of the favorite moments shared on Twitter, and first and foremost the organizers, big thanks to Mike as, without him, the coach retreat wouldn’t be existing today.

Thanks to @mkaufman811 for organizing another #GTACoachRetreat Thanks, too, to @Manulife for sponsorship and @rangleio for space

These are my notes from Christopher Avery’s talk: 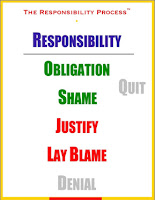 A & B personalities (not using Coach, Mentor etc roles), the closest it get was the Helper for one of the roles.

JUSTIFY: It’s about the story, it’s about the environment, situation, weather, something external, that’s just they way it is.

When logic doesn’t work, you need to find a way to break the stage. You want to break out of the stages and move up.

Responsibility Scenarios to use: You don’t know the solutions, it’s close. That’s the best way to have a scenario, not only for the responsibility process but also for the coaching scenarios.

Coping States: Comfortable in the problem, an example the meetings that are not necessary to go to, but since our boss asked us, we go.

How to get to the “I don’t want to cope”

Moving back and forth between stages.

OBLIGATION: have to, don’t want to. what has us trapped.

How to break that stage? First, how to apply to ourselves

Responsibility only works if self-apply

Stages => Islands in the mind

QUIT stage: checking out, escape route, for not feeling the SHAME, a way to disengage, a safety mode

Check out the Resource guide under The.LeadershipGift.com, 12 Resources, 10 free and 2 very cheap!